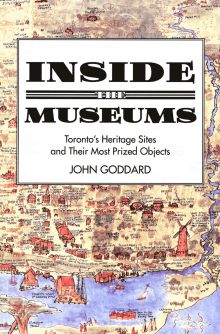 Inside the Museums: Toronto’s Heritage Sites and Their Most Prized Objects arrived in June 2014, telling the stories of ten key Toronto heritage sites, and the artifacts that best illuminate the city’s early history.

Here is my one-minute video on the book:

Top 10 Obscure Facts From Inside the Museums

1. The Orange Order began as an Irish Protestant fraternity sometimes referred to as the Loyal Order of Lodgemen, or LOL.

2. Robert Baldwin, of Spadina House, left instructions for a male version of a Caesarean section to be performed on his corpse in homage to his beloved wife, Eliza, who died at twenty-five in 1836 after such an operation.

3. To project a dignified image as Mayor of Toronto in 1846, William Boulton sat for his official portrait wearing black silk stockings, frilly sleeves, and white lace exploding out of his vest.

5. “The most cruel and intense sensation of pain” that Rebel leader William Lyon Mackenzie says he ever endured came when, trying to escape, he walked naked up to his neck in an ice-filled stream carrying his clothes above his head.

6. A meeting to debate Toronto’s first municipal tax ended in horror in 1834 when the Market Hall balcony collapsed, hurling at least seven spectators onto the butchers’ hooks below and killing them.

7. With government militia closing in, rebel wife Liza Gibson hid her baby in a snowbank and returned to her house to rescue the family clock, the most technologically advanced item anybody could own in 1837.

8. At the age of seventy-five, in 1834, Chief Justice William Campbell subsisted on a diet of snipes hunted in the marshy harbour, and died when the birds flew south that fall.

9. As a high-school project in 1934, sixteen-year-old Sheila Wherry built one of Fort York’s standout exhibits, a scale model showing York and its defences in 1812.

10. Postal rates and paper cost so much in the early 1800s that, after writing one page, a person would turn the paper ninety degrees and write the second page over it at right angles.

When you write a book about heritage-house museums, you want to encourage press comment but avoid being called a “nerd” or a “geek.” On July 11, 2014, National Post reporter Peter Kuitenbrouwer mentioned my book toward the end of a profile of Toronto mayoral candidate David Soknacki. The story portrayed Soknacki as a bit of a geek. As evidence, the reporter said Soknacki chose to attend my book launch rather than dine with influential people. The reporter ends his story this way: 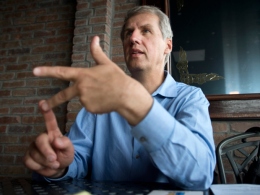 [Soknacki] won three elections to council. Still, one wonders about his instincts. The weekend before our lunch, the Soknackis opened their back yard to a fundraiser for the Rouge Valley Health System. The organizer of that event invited Mr. Soknacki to a party in thanks; the candidate sent his wife.

He went instead to Mackenzie House, a city museum, for the launch of John Goddard’s book, Inside Toronto’s Museums.

Was that the best use of his time?

Well, he found it interesting, he said.

“John Goddard gave us a thumbnail sketch of each of Toronto’s 10 museums and the importance of each.”

It was the geek’s choice.

Toronto Sun columnist Tarek Fatah writes about my book in the context of Doors Open Toronto. “Author John Goddard is a history buff of sorts,” the piece begins. “His latest book, Inside the Museums: Toronto’s Heritage Sites and Their Most Prized Objects, is an in-depth tour of our history ranging from the battle at Fort York to the Upper Canada Rebellion.” DoorsOpenForMuslimBrotherhood?

The City of Toronto really got behind this book when it came off the press, co-hosting a launch at Mackenzie House, with Director of Museum & Heritage Services Larry Ostola officiating. The next day, on June 18, 2014, the city issued a news release saying in part: 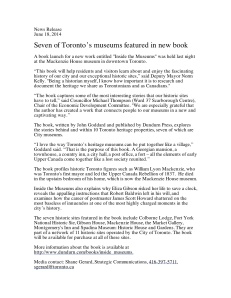 “This book will help residents and visitors learn about and enjoy the fascinating history of our city and our exceptional historic sites,” said Deputy Mayor Norm Kelly…

“The book captures some of the most interesting stories that our historic sites have to tell,” said Councillor Michael Thompson (Ward 37 Scarborough Centre), Chair of the Economic Development Committee. “We are especially grateful that the author has created a work that connects people to our museums in a new and captivating way.”

Review: Canada’s History magazine. “Goddard doesn’t just draw the reader in; he walks us through each of the ten sites, building-by-building and room-by-room.” — Jessica Knapp

Zoomer Profile: “John Goddard’s Early Retirement Takes Him to Early Toronto.” “The book seduces the reader into being entertained by Canadian history to an extent that generations of kids forced to study the subject in school couldn’t have imagined. Goddard uses the sites and the objects of ten Toronto museums as springboards to bring alive the characters — including their sometimes startling idiosyncrasies — who created Upper Canada.” — Judith Gerstel, EverythingZoomer.com 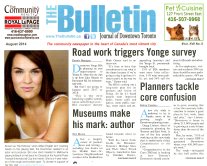 The Bulletin Profile: “Museums make his mark: author.” I don’t know what the headline means. On the inside page the head reads, “St. Lawrence resident writer took transit to see museum collections.” 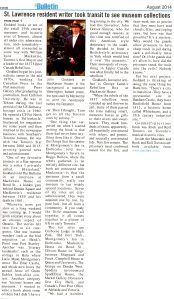 Quote: “We had a horrible beginning to the city. We had this [Lieutenant] Governor, John Graves Simcoe, who… decided to form a British-style aristocracy in York which would lord it over ‘the peasants.'” — John Goddard

Quote: Goddard’s favourite artifact is George Lamb’s Rebellion Box at Mackenzie House. “When the rebels of the 1837 rebellion were rounded up and thrown in jail, many of them passed the time making small, memento boxes as gifts to their wives and sweethearts…. [T]heir work was so precise that they must have used chisels, files and coping saws, but how was that possible? It’s a mystery. Why would the guards allow prisoners to have sharp tools in jail during such a politically tense time? Or, if the guards didn’t allow it, how did the prisoners sneak the tools into the cells? Nobody knows.”