Goddard stands with colleague Jahan Basch Norai at the U.S. Embassy in Tehran, in early 1981. 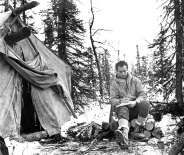 Goddard takes notes at a Dene hunting camp at the Arctic Circle on the Mackenzie River, N.W.T.

Goddard inspects the grave of rebel leader William Lyon Mackenzie while researching “Inside the Museums.”

John Goddard works as a Toronto-based journalist, author, copy editor, and media professional. His interests range widely. He travels extensively. He enjoys writing hard news to deadline and delving into subjects that most news organizations let fall through the cracks.

As a reporter for The Canadian Press, he covered the American Hostage Crisis in Tehran, and opened the agency’s first bureau in the Far North, based in Yellowknife.

As a freelance magazine writer for fifteen years, he wrote on everything from a mass caribou drowning in northern Quebec, to the adventures of B.C. author Edith Iglauer, to the truth behind Farley Mowat’s early Arctic books. All three stories won national awards.

At the Toronto Star for thirteen years, he served variously as a photographer, copy editor, page-layout editor, world-music columnist, reporter for the city-news, business and entertainment sections, and once as videographer documenting pop-star Kemer Yousuf on his triumphant homecoming tour of Ethiopia.

Goddard has written or collaborated on eight books covering such diverse subjects as the Arab-Israeli conflict, indigenous land rights, 19th-century Ontario heritage, and rock and roll. His most recent work shows how the people of southwestern Ontario, rallying after a sensational murder in 1894, captured the killer and erected a tender memorial to 13-year-old Jessie Keith that still stands in Listowel, Ontario.