Inside Hamilton’s Museums helps satisfy a growing curiosity about Canada’s steel capital as it evolves into a post-industrial city and cultural destination. With an emphasis on storytelling and unsung heroes, the book identifies where Sergeant Alexander Fraser bayonetted seven enemy soldiers in a battle to save Upper Canada in 1813. It evokes the day in 1939 when King George VI and Queen Elizabeth opened the Queen Elizabeth Way, the first intercity divided highway in North America. And it illuminates the four months in 1846 when an otherwise immensely privileged teenager, Sophia MacNab, documented her mother’s excruciating demise. 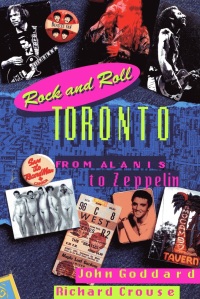 Rock and Roll Toronto: From Alanis to Zepplin, by John Goddard and Richard Crouse, Doubleday, Toronto, 1997. Part guidebook, part musical celebration, Rock and Roll Toronto details the seminal rock events that took place in the city’s clubs, thaverns, churches, apartments, hotel rooms, and laundromats. It locates the bar where Bob Dylan first met the Band, the exact hotel room where Margaret Trudeau entertained the Rolling Stones, and the rooming house where Joni Mitchell struggled in poverty while pregnant with a daughter she gave up for adoption. The book includes a tour of Neil Young’s early Toronto homes, and follows John Kay’s transformation from Humberside Collegiate introvert to lead singer on Steppenwolf’s timeless rock anthem, Born to Be Wild.

“Dear Lord, this is our last night in Toronto, the fascist state of Toronto.” — Madonna

“Toronto did the coolest thing by me.”— Keith Richards

“One of my dreams would be to live next to Maple Leaf Gardens and see every game there.”— Tiny Tim

“Rock and Roll Toronto is an essential pop culture book… a fascinating, well researched read that rolls along like the best three-minute, 20-second pop song…. And like the best pop music, when it’s over it leaves one wanting more.” — Bob Klanac, London Free Press

“One of the best and funniest stories is actually told by Kingston writer Carolyn Smart about how she was a Beatle maniac, and avidly pursued them when they were staying at the King Edward Hotel in 1965… Another has Richard Flohil eloquently and tenderly reminiscing about blues legend Lonnie John’s last public appearance, after he had been hit by a car and had a stroke in the hospital.” — Greg Burliuk, Kingston Whig-Standard

“If you know what happened in room 2214 of the Westin Harbour Castle in 1977 or where the first Juno Awards were held — ‘The room cleared by midnight and we all took the subway home,’ Anne Murray claimed — you’d smile to see Toronto’s tuneful history summoned again in print. And if you don’t know that hotel room is where Margaret Trudeau huddled with the Rolling Stones, or the Junos were birthed in the St. Lawrence Hall, you need a Rock and Roll Toronto paperback even more.” — Gary Dunford, Toronto Sun

“Last Stand of the Lubicon Cree tells the story of one of the longest and oldest human-rights violations in Canadian history. It is a story that underscores the pervasive injustice and discrimination which confronts aboriginal people across this country.” — Ethel Blondin, MP Western Arctic

“This pamphlet will protect you from the bears,” says the woman at the Parks Canada trailer. She means the pamphlet tells how to avoid encounters with bears, but we tease her, unfolding the pamphlet into a bear shield, the rolling it into a stubby bear knife.

The Parks Canada woman laughs; she is used to tourists. Every summer, more than 10,000 people stop at her trailer at the foot of Sheep Mountain, on the perimeter of Kluane National Park… There are more than 4,500 Dall’s sheep in the park and Sheep Mountain is a good place to find some of them.

“I don’t know where they are today,” the Parks Canada woman says. “Maybe around the other side.” And we are off. 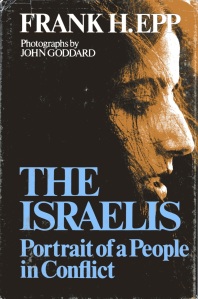 “A superb book, Dr. Epp shows not only sympathy but also empathy for the Jews… His epilogue is especially moving.” — Rabbi Reubin Slonim, Congregation Habonim of Toronto 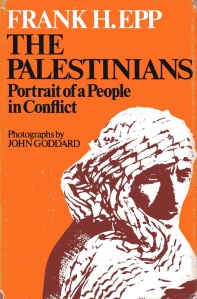 The Palestinians: Portrait of a People in Conflict, By Frank H. Epp, photographs by John Goddard, McClelland and Stewart, Toronto, 1976. At the time of the book’s publication, Palestinians were viewed in Canada as mostly terrorists. Epp and Goddard travelled to Egypt, Lebanon, Syria, Jordan, the West Bank, and Gaza to build a more comprehensive picture.

“Unlike most previous treatments of the Palestinians, Epp, president of Conrad Grebel College at the University of Waterloo, does not rely on politicians to get at the Palestinian mood. He has moved among the people and interviewed 172 laborers, housewives, students, teachers, doctors, engineers, guerrilla fighters, businessmen, pastors, journalists and teen-agers, has recorded their words and, with the help of Peterborough photographer John Goddard, also their faces. The words and pictures have produced a much needed insight into the collective Palestinian character… Epp’s accomplishment is that he brings the popular reader face to face with an unknown quantity.”  — Rabbi Reuben Slonim, The Globe and Mail

“As current history, the work is a valuable document of great immediacy and impact.” — Arab Review